John and his dogs have had a very successful spring and summer.

Take that first step to

help your dog reach its full herding potential! Click below to learn more about John's style

After a long wait Dog4ewe is happy to say that we are expecting two litters early this winter.

In addition to clinic, John also provides training to a limited number of dogs as well as evening and weekend lessons, judging and demonstrations.

About John Holman and Dog4Ewe

John Holman is from Clay Center, NE where he is where he retired after 30 years with the USDA.  John actually began his love of stockdogs in 1980 while he was employed by  a sheep herdsman for Mississippi State University. John is known for his DOG4EWE Border Collies, but has had extensive experience with Bearded Collies, Australian Cattle Dogs, Austrailian Sheperds, Bouviers, Shelties, Corgis, Puliks and Belgians. He is also a licensed AKC, AHBA and USBCHA judge.

In open competitions John has had 9 wins at the Iowa State Fair, 8 wins at the Nebraska State Fair and a record 10 wins at the National Western Stock Show.  In 2003 John began competing in the USBCHA National Cattle Dog Finals and has consistantly made the top ten with dogs like Moo, Trim, Mick, Roy, and Lee who is the 2014 USBCHA National Champion Cattle Dog!    In AKC competition, John has won over 75 HITs and RHITs with his dogs. He has also campaigned dogs to 7 Open and 4 Pro-Novice High Point Dog of the Year awards with the Nebraska Stock Dog Association.

DOG4EWE Border Collies are the product of over 30 years of work and 6 generations of selective breeding. They have enough power for tough cattle and are very biddable at the same time. DOG4EWE Border Collies are used successfully as ranch, trial, agility and obedience dogs all over the US, as well as Canada and Europe.. John is very grateful to all those that have helped him over the years. He couldn’t have been this successful without the support of his family and friends in the stockdog community!

John has traveled all across North America and Europe teaching clinics and would love to do one in your area. John is known for his DOG4EWE Border Collies, but has extensive experience with a large variety of herding breeds. No matter which breed of dog, the theme of John’s clinics are to develop a calm working dog that is happy to work for you and with you!

Clinics are positive and calm, with an emphasis on developing the right attitude for working calmly and moving stock quietly. Handlers of all experience levels are welcome. John will work with each person and dog individually, focusing on what the team wishes to accomplish. Whether you are just starting out in herding, starting a young dog, working your dog on the farm, or fine tuning for the trial field, everyone can take away something beneficial from John’s clinics.

Clinics can be held for one day or multiple days. Each participant gets to work their dog twice each day, with John expertly analyzing any problems and giving clear concise recommendations about how to correct problems. He wears a live mic so that everyone in attendance can benefit from each other. Discussion after each dog is encouraged. Auditing is usually available for people who are not working a dog but wish to benefit from the clinic. Call us at (402) 469-5056 or email for details about booking a clinic in your area. Current scheduled clinic dates are listed here.

Agility on the Farm

Training is available to a limited number of dogs here at our facility. John’s positive training philosophy is designed to teach the dogs how to use their natural ability in cooperation with the handler. “It is very important to understand what the dog is thinking to know what is motivating it!” Dogs can be trained for farm and ranch work or for trial work in USBCHA, ASCA, AHBA, or AKC. We even offer handling services if that is your desire.

“The most important thing when starting a young dog is to develop the right attitude,” John says. “Even before you take your dog to stock, you should be developing a good working relationship with your pup by earning its respect and having it respond willingly to you. When I train a dog I always try to get into the dogs mind and understand what is motivating it. I adjust my approach to the feedback the dog is giving me.” “I want my lessons to be quite, calm, and slow paced.”

John gives lessons evenings and weekends by appointment. Many of our customers have taken advantage of this inexpensive way to teach their dog and learn how to use it better. Dogs start in a small round pen and can be worked up to open field work in our 5 acre pasture if you desire. “We teach you how to teach the dog!” Please contact us to schedule a lesson and for current lesson pricing.

John is a popular USBCHA, AHBA, and AKC judge. In April of 2006 John judged the USBCHA National Cattle Dog Finals. He is known for being fair and impartial with a lot of stock savvy. Please call well in advance to check on his availability.

The Holmans enjoy displaying the awesome talents of their DOG4EWE Border Collies to crowds all over the Midwest. They can tailor a show to what ever fits your time and space requirements. 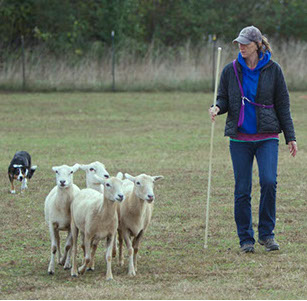 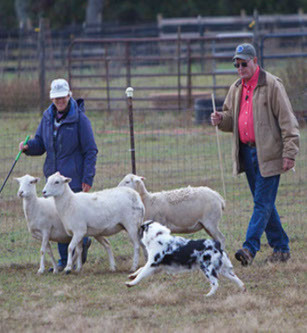